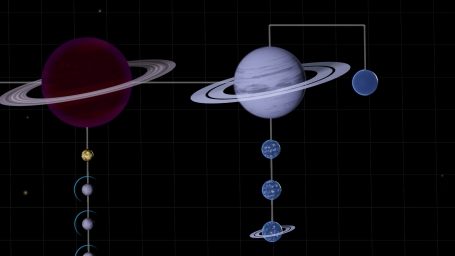 By Sagittarius EyeMarch 16, 3304No Comments

While on the Pilot’s Federation mapping project Perseus Survey Commander Mist0 made a startling discovery; Three Earth-Like moons orbiting a gas giant planet in the Rhuedgie KN-T e3-721 system, and to make this discovery even more spectacular, one of them is ringed and the system is what explorers refer to as a ‘green’ system, meaning the planets have the correct mix of resources to restock a ship’s synthesizer to make a FSD boost charge – often called “jumponium” in long-range exploration jargon.

To explorers Earth-Like Worlds (ELWs) are the most sought-after planetary types, with many Commanders keeping logs of the blue-green globes they have discovered. Finding one with a ring around it is an extremely rare event, and even more coveted.

Speaking to us earlier, Cmdr MistO was quick to point out that he first thought it was a bug in his scanner software:

“It’s pure luck, this system has been here since the the star formed, anyone can find that kind of system after 10 jumps… or never. At first I thought ‘there’s something wrong with this picture‘ and then I realised what I’d found!”

Famed Imperial explorer Commander Marx, who maintains list of Earth-Like Worlds, commented on this discovery: “Wow, that’s very impressive, I believe nobody has found such yet. Right on, Commander!”

The Perseus Survey continues for another 44 days, who knows what else is just waiting to be discovered.