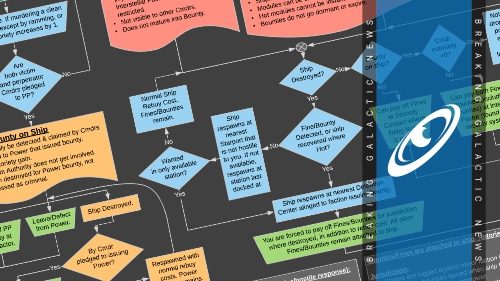 By Sagittarius EyeMarch 27, 3304No Comments

An organisationally-minded pilot, Commander Jack Shaftoe, has untangled the Superpower’s new crime laws and presented them in an easy-to-understand visual chart.

This quick-reference visual aid will surely help out those who unintentionally fall foul of the long arm of the ATR.

“My mind has trouble keeping all of [the new laws] straight… pictures work a lot better for me. In a nutshell, once you’ve gone and gotten yourself a Fine, Bounty, or Power Bounty the only way to get rid of them is through the light green trapezoids (not to be confused with Thargoids) along the bottom [of the chart]. I’ve made a ‘light’ version as well as a ‘dark’ version for those of us who like to fly with the lights off. Fly safe, Cmdrs!”
– Commander Jack Shaftoe, March 3304

The new laws adopted recently by all the major superpowers, commonly known as the ‘Crime and Punishment’ initiative, have left many scratching their heads over the complex web of possible infractions leading to fines and bounties.

The work of Commander Jack Shaftoe is already being reproduced by many starport shop vendors. It is most commonly available in holographic window-sticker, digital download and laminated extra-large wall chart format.