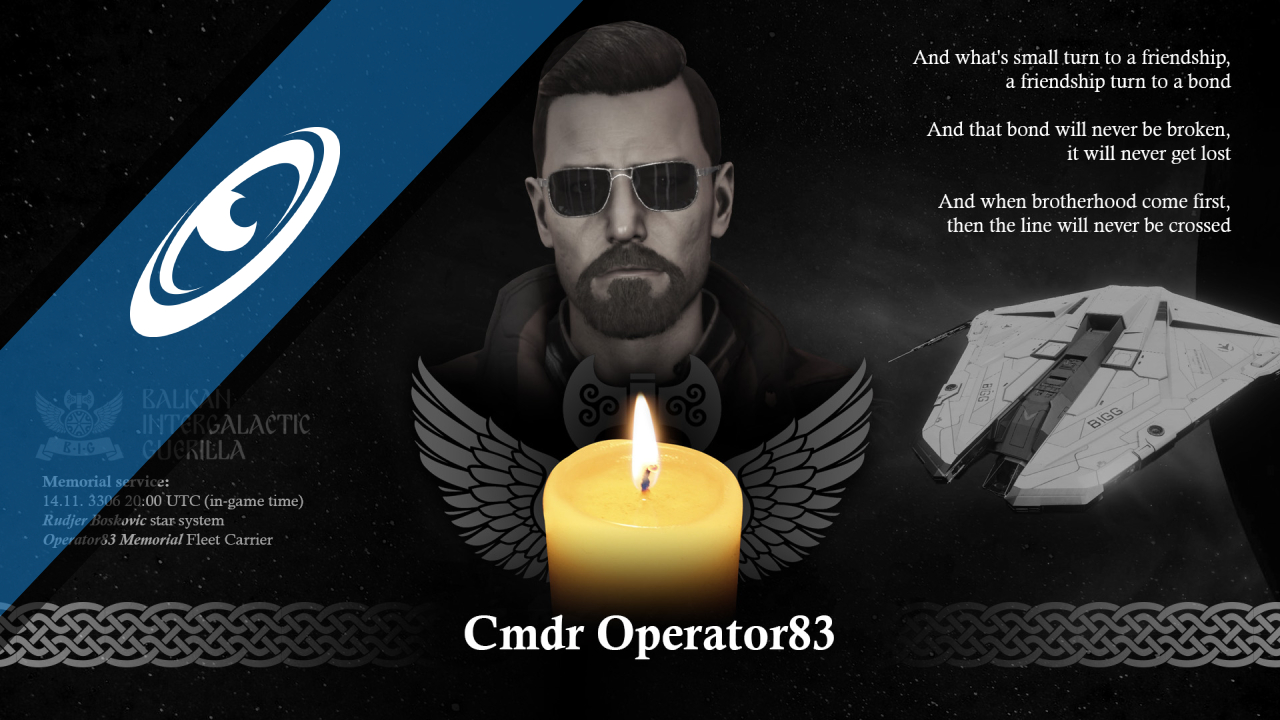 By Sagittarius EyeNovember 11, 3306No Comments

The members of the Balkan Intergalactic Guerilla (BIG) group are sad to announce that they have lost a dear friend and fellow Commander, 37-year-old Commander Operator83 (known as Zoka).

Zoka was one of the original members of BIG. He was a proud Imperial warrior who answered the first call to mobilisation and volunteered to defend their home system, Rudjer Boskovic, against aggression by Federal groups in the year 3300.

Having proved himself as a very capable combat pilot he was selected to represent team BIG in seasons 1 and 2 of the prestigious Pilots’ Federation pilot-versus-pilot league in 3301. His finest hour came in a famous tie-breaker victory, when he helped their team to secure a third place in the galaxy.

Following this victory he was promoted to the rank of Voivoda (Duke), the highest honour bestowed by BIG. He went on to share his enormous experience with new members as a flight instructor and mentor. Zoka also proved to be an excellent SRV driver and climber.

In 3302 he answered humanity’s call to defend against the growing Thargoid threat in the frontline systems around Asterope.

Finally, this seasoned veteran decided to seek solitude and fulfil his lifelong longing for exploration by setting out with the Distant Worlds 2 expedition in 3304.

He answered the call of the black — and the black finally took him — on October 24th this year.

His roaring laughter in the face of danger and most difficult of times kept the group together and their spirits up. It will be sadly missed.

After much searching members of BIG have managed to locate Zoka’s Krait Phantom ISS Millennium Falcon in a far corner of the galaxy. Through great effort, they have managed to return it to the Rudjer Boskovic system where it will be displayed in his memory.

They invite all commanders who would like to come and pay their respects to join them on November 14th on the Fleet Carrier Operator83 Memorial in the Rudjer Boskovic system, at 20:00 UTC (open). Commanders are invited to fly past his ship and the guard of honour and fire chaff as a final salute to a beloved member of the BIG and wider community.