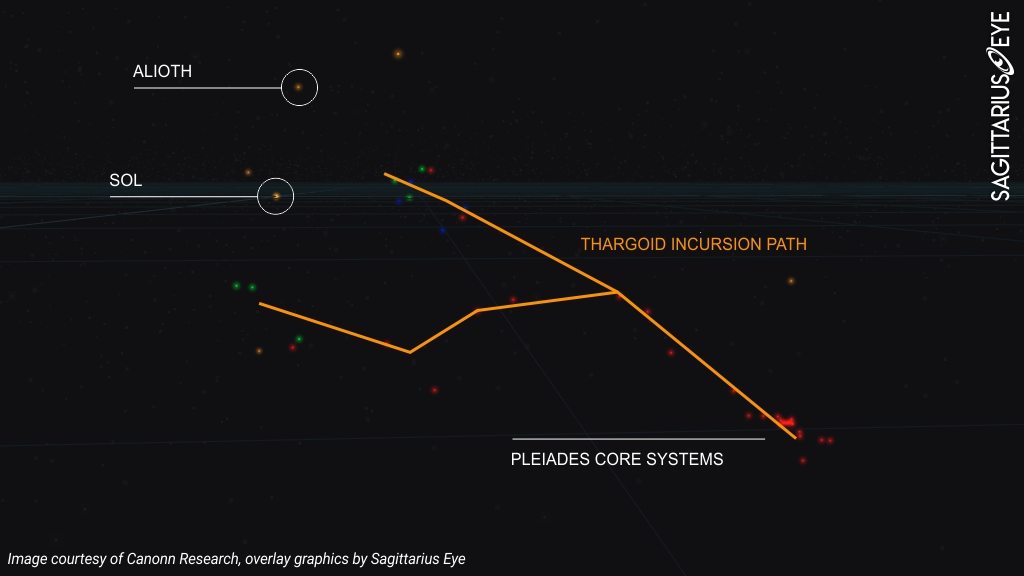 Special Report: Anticipating the Path of the Thargoid Advance

By Sagittarius EyeApril 23, 3304No Comments

In this special report, we focus the Eye on the Thargoid Advance into the Bubble. Large numbers of Pilots Federation members appear to be the only effective defence against the Insectoid aliens but are woefully under-supported by the Superpowers. Field reporter Edelgard von Rhein investigates for Sagittarius Eye.

Each week we hope that Aegis’ Eagle Eye operation will provide us with a new list of systems that are about to be attacked and each week volunteers fight, without the support of the superpowers or even the local factions in the systems at risk, to try and destroy enough Thargoids to thwart their strikes against stations.

Most recently, there were attacks predicted in 32 c Piscium and Kunuvii, however, the warnings – and the Thargoid presence – did not allow time for an adequate response. Both Eyharts Enterprise in 32 c Piscium and Weil Station in Kunuvii are now in flames and will require considerable time and effort to repair.

There is clearly a need to be pro-active rather than reactive and to be able to predict farther in advance when stations will be attacked.

It is known that each station that is to be attacked is ‘marked’ by the placement of a Transmitter about 1000 km away. It is not known exactly how far in advance of the attack that these devices, that have so far resisted all weapons’ fire, are placed. It is not known what ship places them there. It is known that the systems that are threatened all have Ammonia Worlds – so can we predict where will be next? Perhaps – but could we even stop it if we knew about it?

The Thargoid advance shows two branches, apparently in a classic pincer movement. These two routes have a common origin about two hundred light-years from the Pleiades, where the trail of destruction followed the path of previously established outposts.

One branch takes a route that zig-zags through to, most recently, 32 c Piscium and now LP 581-36 is apparently marked. So where might be next? This route is the more regular of the two and looking at populated systems with Ammonia Worlds in a continuation of this path suggests that the systems Byeru Bese (population: 473 million) and Lusonda (population: 3.2 million) are in prime position to be attacked after the Thargoids have moved on from LP 581-36. The following week, Oitbi (population: 3.2 billion) is located on the path of the advance.

The second branch is harder to anticipate as it is less regular, seemingly taking a path heading towards Alliance space. The Kunuvii system is the most recent loss on this path and currently, Deriv-dar is facing imminent attack. The next Ammonia World that seems to be best-positioned along the route is in the Quiness system (population: 15 thousand) and Gertrud (population: 98 million) seems also to be positioned close to the route to be at risk. The task of prediction here is complicated by the clustering of Ammonia Worlds. Near to Deriv-dar, the Spocs 253 system (population: 1.2 billion) also harbours an Ammonia World and BD+34 1378 (population: 625 million) is also close enough to consider when asking the question: why Deriv-dar? Are these other systems going to be left alone or attacked this week, or next.

There are some questions that are raised by this information. Is the advance operating to a schedule? Is it the Thargoid objective to annex every system with an Ammonia World? How and when are target stations selected and the Transmitters deployed? What is the extent of the forces engaged in these attacks? What can independent pilots do to halt the advance?

At this stage, gathering of information is the key activity for those not equipped for direct confrontation. The Canonn Research Group are surveying dozens of systems along the frontier looking for Non-Human Signal Sources but so far only systems facing imminent assault have been found to have a Thargoid presence. Locating ships operating in advance of these attacks is not something that has been done but the evidence shows that it is happening – the Thargoid advance is not random but directed, which requires intelligence of the route.

Pilots are encouraged to report findings of Non-Human Signal Sources encountered in inhabited space on the Elite Federation of Pilots’ communications channels or to Canonn directly.