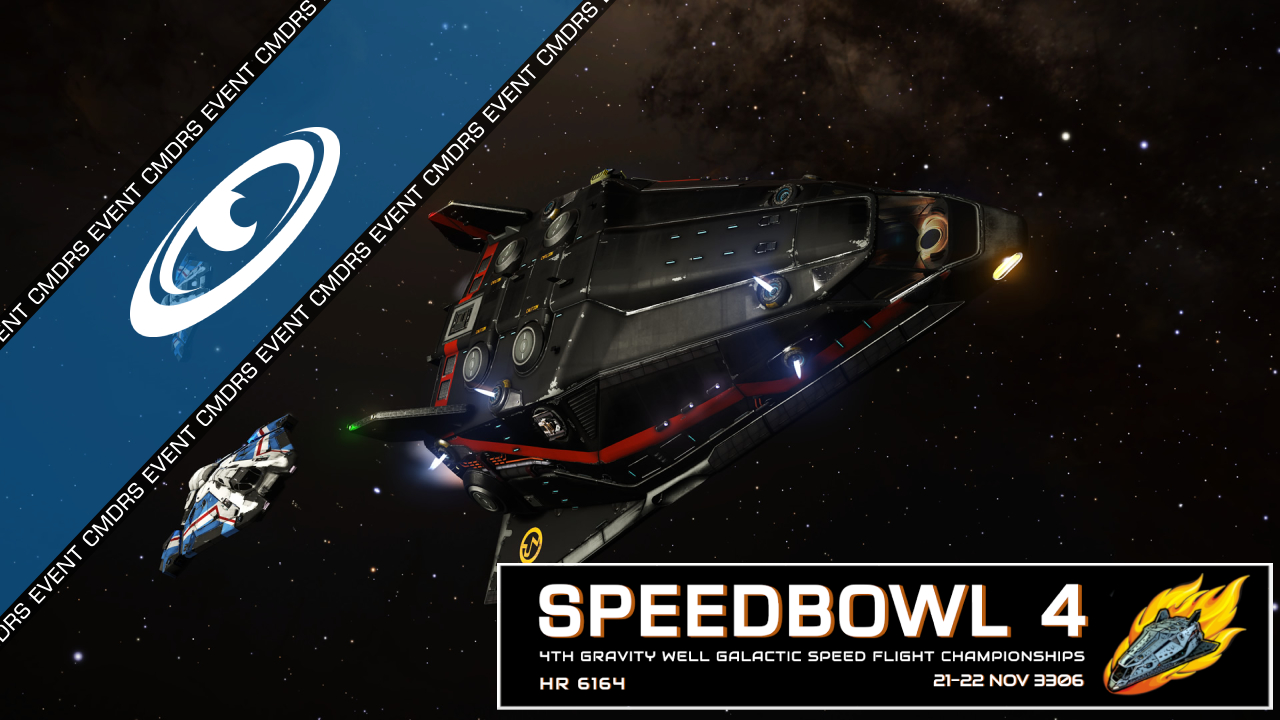 By Sagittarius EyeNovember 26, 3306No Comments

With a weekend of ludicrous speed behind them, the Galactic Speedbowl Association has offered a short retrospective of the event Speedbowl IV – New Grounds, which took place on HR 6164 ABC 2 on the weekend of November 21st and 22nd.

Throughout the weekend forty pilots found their way onto the leaderboard, submitting over 70 runs, with many more attempting qualifying runs outside the official channels. They were supported by nineteen fleet carriers, making the system one of the most valuable outside colonised space for a short time.

Rebuys for single pilots racked up to well over 80 million credits for some, with the most expensive single crash ever recorded in history being Itsumo Ottoke and his cargo hold of low-temperature diamonds worth over 200 million credits.

It all started weeks earlier, with the fleet carriers Lithobrake, Warspite, and the Yeety McYeetface arriving in the system and providing a base for training operations. commanders Azzbo27 and Sulu had already clocked up over 50 million in rebuys from their training runs before the event even started. Sulu, in particular, could be found night after night, throwing various ships at the planet in hopes of securing that one winning run on the race weekend.

The race itself started with a few early birds trying to get their names on the podium spots on Saturday before the veterans and professionals arrived. While these results would not stand for long, they were still impressive — especially considering all of the pilots in question were new to the sport.

The rest of Saturday and most of Sunday saw relatively little happening on the leaderboard, with a few runs here and there.

As with Speedbowling itself, things were going to happen at the end: quickly, and near uncontrollably.

With commanders B.Smitty, Bellicosus, Verminus, Aken B., and Shaye Blackwood vying for the lead, with only one metre per second (m/s) between them, things were coming to a head when defending champion Phoebia entered the fray.

The top five places were separated by five m/s to begin with. Come Sunday evening, there was a three-way tie at 3658 m/s, only broken by measuring the lowest altitude achieved.

This tie sparked a fresh competitive spirit, and it was heartbreaking to see how many runs failed to achieve higher speed by just a single frame in the validation video.

In the end Phoebia, in his smooth, almost lazy-looking style, broke the tie with 3659 m/s. His speed was later matched by Shaye Blackwood; but by that time, Phoebia had already cemented his win with a simply insane 3660 m/s at the heart-pounding low altitude of only 48 m.

Phoebia’s entry was not the lowest run, however, as a special mention has to go to Epaphus, who clocked 3006 m/s while only 6 m above the ground.

In the end, the leaderboard was clean of ties on the podium, giving the win to defending champion Phoebia; Shaye Blackwood of the Elite Racers coming second, and Speedbowl veteran Verminus a close third.

The Galactic Speedbowl Association would like to thank all helpers: the location scouts, the pilots and cameramen of the trailer, voice actors and music composers, the streamers and promoters, the bot developer and the moderators, everyone in chat who helped out with tips and clarifications, and, most of all, the racers participating in the event.

Without this legion of enthusiastic helpers and participants, this event wouldn’t have been possible. In the end, the participation record of Speedbowl III was broken — something the organisers never thought possible.

“Saturday had me chewing my nails [worrying] if anyone would turn up at all, despite nineteen carriers in-system… By Sunday night, I was hoping the submissions would go away… By Monday, 3am, I was ready to throw it all into the bin. So it was pretty much perfect!”

Those interested in joining the Speedbowl community can do so here.

Onwards, to Speedbowl V, and burning up in atmospheres!

Do you have an event you’d like to promote? Sagittarius Eye Breaking News broadcasts directly to over 180 Discord servers.

Let us know what you’re planning.