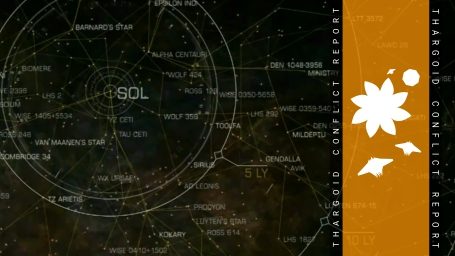 By Sagittarius EyeMarch 19, 3304No Comments

Thanks to the work of Aegis and members of the Pilots Federation, it seems that it’s now possible to predict where the Thargoids will strike next. This compelling theory is still a work in progress, but the events of last week in Huveang De do suggest that by intercepting Thargoid ships in the target systems pilots can make a difference in what is rapidly becoming a war front.

Commander Factabulous, a member of the Canonn Research group, recently asked a simple yet important question:

“Now we have decoded the changed Eagle Eye Comms Beacons and found that this week they plan two attacks – specifically Lorentz Dock in HIP 21559 and Glazkov Terminal in Irandan. Non-Human Signal Sources have been found in both systems already. Irandan has a population over 300,000. HIP 21559 has a population of over 3,000,000,000.

So the question is – who will you fight for?”

In the last three days many independent pilots have been weighing up the options. Commander Olivia Vespera, well known for creating the much-used logogram chart of Thargoid markings last year, commented:

“What you’re asking us is to sacrifice the safety of 300,000 lives in exchange for data on whether we’re actually having an effect

Do the ends justify the means?”

Commander Dab42 was able to get a message through from HIP 21559:

“… combat with many scouts destroying as many as 12 in a group. Did see a few larger ship but as alone left the big ‘giods to the more experienced…”

Pragmatic investigator Commander Thatchinho pointed out the need for more results, agreeing with others that evacuating Irandan makes the most sense:

“I’ll say the same thing as I did for that situation. We crucially need more intel on the Thargoids tactics and capabilities. Let’s evacuate the low population system, defend the high population system, and see what happens next.”

The original discoverer of one of the Eagle Eye stations, Commander Deathbringer37, contested that when dealing with the potential survival of our species, the ends justify the means:

Personally, I think the tactical information we stand to gain is well worth the 300,000 lives we will lose. Down the line, when the Thargoids encroach upon more of our core worlds, this information could save us many more lives. Do you posit that 300,000 lives today are worth as much as, say, 30,000,000 next week?

This discussion continues as more pilots become aware of the Aegis Eagle Eye stations. Whether they know it or not the Thargoids are presenting us with difficult choices already. There are still many questions to answer but for now it seems the best option is to get to a combat ship and help hold the line.